This author has not yet filled in any details.
So far praise has created 54 blog entries.

REV. ALVIN TUNSTILL, JR., PASTOR
Trinity Baptist Church will be the site for the COVID vaccines June 4, 2021 and for the second dose on June 25, 2021. 100 appointments available for the Pfizer vaccine. Below is the link to register for the vaccine.

Sunday, April 25, 2021, Rev. Alvin Tunstill, Jr., and First Lady Dr. Sandra Mitchell-Tunstill received honors for their 25 years of commitment, dedication, love, and service as servants of God to Trinity’s membership, their families, and the Community. Under their leadership Trinity has remained a beacon of light and a pillar of service and love to the Jefferson Park and Los Angeles Community. To commemorate the occasion, church leaders presented Rev. Tunstill a Certificate of Appreciation and First Lady, Dr. Sandra Tunstill received a beautiful bouquet of Red Roses.

During the surprise ceremony, members of the leadership team commented on several significant accomplishments during the honorees 25 years of service to Trinity and the Los Angeles Community. 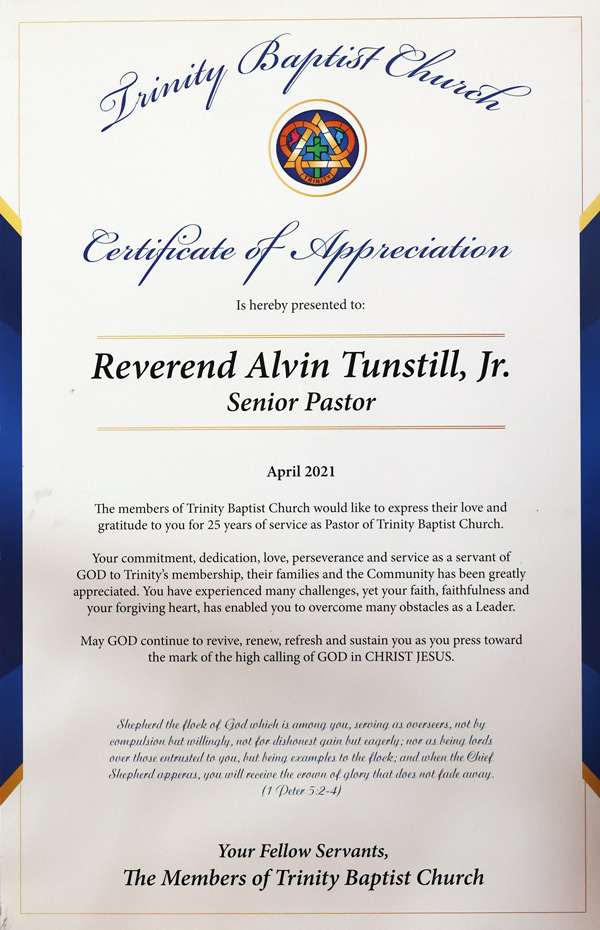 DR. PRISCILLA RATCLIFF – A Brief History Of Her As An Educator, International Entrepreneur, Fashion Designer And Teacher.

Everyone can be tested with or without symptoms by appointment only.
To schedule an appointment, call Alicia Vargas – (213) 400-0552.

This is a partnership between the Honorable Holly Mitchell, Supervisor, 2nd District and Trinity Baptist Church, where Rev. Alvin Tunstill, Jr. is the Pastor.

PLEASE JOIN US NOW! A Message from Pastor Tunstill

I am asking for your prayers and support during this crucial time in our country.

We will begin a time of Prayer and Fasting, beginning the week of October 7th, 2020. The theme and focus will be Prayer and Fasting for “PEACE” during and after the election process. I will be teaching on Prayer and Fasting. We will have weekly updates and dedicate every Wednesday from 12:00pm-4:00pm as our time of praying and fasting. At noon every day, we encourage you to Stop and pray. Psalm 55:17…’Evening and morning and at noon, I will pray, and cry aloud, and He shall hear my voice.’

“HBCUs have an important role in the African American Community as schools that first gave Black students the opportunity to obtain higher education when virtually no other colleges would. HBCU experience can provide a culture of caring—a culture that prepares students to contribute to their communities, a culture that builds confidence and that gives them the essential skills they need to cultivate a career. 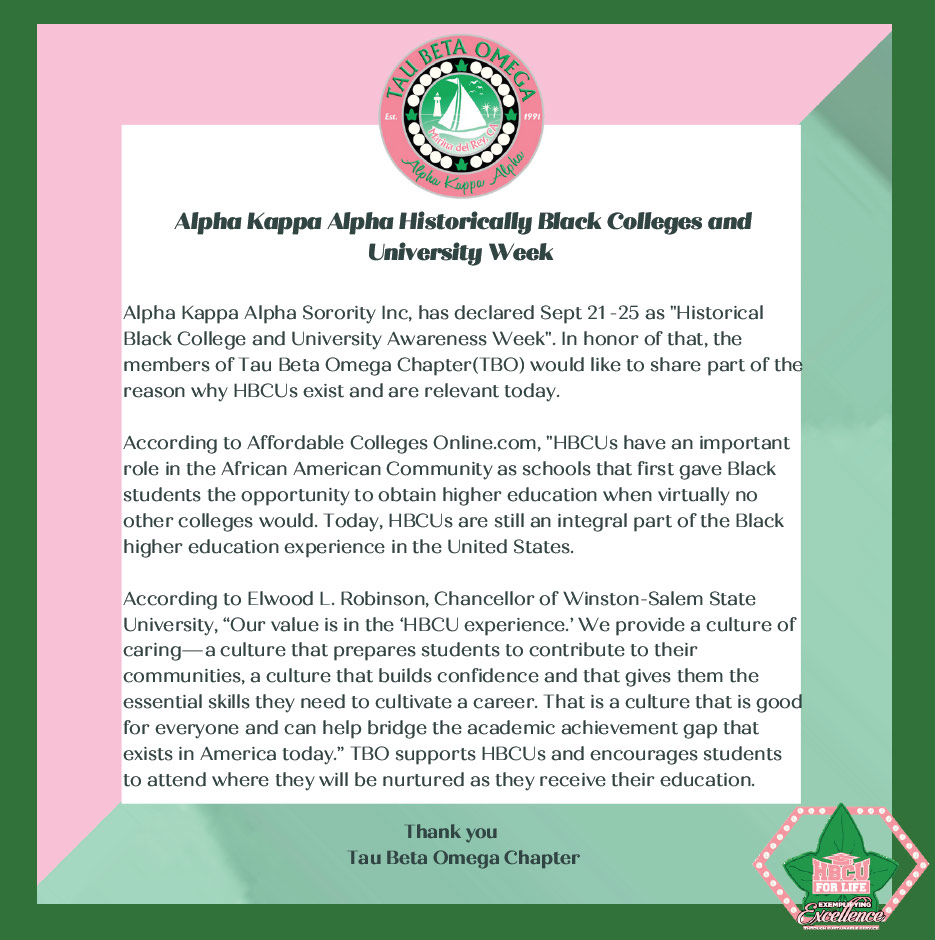 Being aware of the challenges that Distance Learning brings.  It is vitally important that our children succeed in this environment.

COVID-19 has provided us with a series of challenges, educational achievement being first and foremost.  To alleviate some of the learning obstacles, Trinity Baptist Church, on the recommendation and guidance of the Scholarship committee, was able to gift 50 students with his/her own personal laptop computer to be used in pursuit of their academic achievement.  School Districts throughout the country indicated that students will be taught through Distance Learning.

We know the sheer strain that this learning environment brings; however, we also know that with the aid of the Holy Spirit we can help our students achieve their learning goal.

What a blessing it is for Trinity Baptist Church, through the grace and mercy of our Christ to allow us to connect with our children and youth.

Thank you seems like an insufficient way to express our heartfelt gratitude for your presence, your acts of kindness, and your Christian sharing of love. Your arms have embraced us, your smile encouraged us, your food nourished us, and your prayers have strengthened us. Our hearts will long remember your kindness.
The Family of Lorene Morgan Bradley

On a 168- acre farm in Lonoke County, Lorene “Lo” Morgan Bradley came into this world. She frequently spoke of the place that her grandfather “Papa” purchased because he desired to provide a home, food, and nurturing for his family which included a wife, children, and grandchildren. Along with her siblings, Gertha, Mickie, Theodis and a Cousin Annie, she toiled on that farm, and yes walked quite a distance to a one room schoolhouse that she attended. Her memories were filled with pulling a wagon with her Uncle Lawrence riding in it to get blocks of ice. Spoiled Uncle Lawrence, a Mama’s boy, was as old and big as Lorene. From her perspective, her Papa died when she was about 9, way too soon, leaving them to long for nurturing and feeling at a loss for many years.

As Lorene gracefully grew, she became thoughtfully serious and at times a bit anxious. Her younger sister Mickie tells of when Lorene was worried that Eisenhower would become president and that “Negroes” would be doomed. As the story went—Lorene thought she might as well dig a hole to bury herself in a field on that 168-acre farm. Well, she did not do that. Instead, she began to seek out friends who came from nurturing families and whose dinner tables presented plenty, a tradition among families in her community. During her senior high school year, she was awarded a college scholarship from Zeta Phi Beta Sorority, Inc.

She made plans to attend Arkansas A, M and N College, presently University of Arkansas at Pine Bluff. During Lorene’s introspective years, she was making plans for a future. She went on to graduate from college, and as some might say today, she kept it real, targeted and accomplished a future filled with professional growth, love, and family. She often said that if she, with her story could make it, anyone could.

Lorene Morgan Bradley was born on November 9th, 1938 in the County of Lonoke, Arkansas to Albert Morgan and Katie Bledsoe. Lorene accepted Christ as her savior and was baptized in July,1948 at Zion Chapel Baptist Church, under the pastorate of Rev.W.W. Terry in Pettus, Arkansas. She attended George Washington Carver high school and Arkansas, A M and N College at Pine Bluff where she received her Bachelor of Arts degree in “Elementary Education.”

After graduating from college Lorene began her teaching career in Searcy, AR, White County Training School. She worked there one year before her passion for teaching lead her to Los Angeles, CA where the opportunity for success as a teacher seemed greater. Upon her arrival in Los Angeles she soon discovered that entering the Los Angeles Unified School District system of education required more credits than the system she had left and therefore required additional work on her part to meet the California teaching credentials requirements.

She served the Los Angeles Unified School District for 35 years. During this period Lorene chose to further her education to prepare for greater opportunities within the school system. She entered Pepperdine University in Los Angeles, CA where she received a master’s degree in Early Childhood Education. Her master’s thesis was “Early Childhood Education”, published in August 1976. From there her career progressed from teacher to her final position of principal at several schools in the Los Angeles Unified School District.

The Los Angeles School District selected Lorene as one of the Inner-City School teachers to participate in the School Integration Program. She was assigned to the Sherman Oaks Elementary School in Sherman Oaks, CA for several years. The school had no curriculum materials on African Americans except for the limited
information that textbook had begun to include. Lorene gathered materials her students could read. She collected Ebony, Essence, and life magazines as resource material for the students reading projects.

At the end of the school year Lorene believed the students demonstrated a greater understanding and appreciation for African-American history and their knowledge helped change the views of their parents by discussing their projects at home and involving them in their research projects on the achievements and contributions of African Americans to society.

The school integration program was discontinued and replaced with a Magnet Program in 1981. Lorene returned to the inner city and was assigned as a Multicultural coordinator in Region B Multicultural Center to oversee the Multicultural Education Program in all Region B schools. She served in this position until 1983 after which she was assigned to 66th street school where she was responsible for managing the teaching of Multicultural Education. Reading motivation among the students was extremely low. It appeared that the children were checking out books from the library but were not reading them. Wondering what she could do to motivate the children to read she thought the 1984 Olympic Games coming to Los Angeles would be a related experience that would motivate the children to read. She then developed the Reading Olympics and Awards program. Parents were involved by certifying that the student read the books reported. The Program became so competitive that students were seen reading during lunch and recess periods.

At the conclusion of the program a Reading Olympics Award assembly was held at the school. Olympian athletes were invited to present the trophies to the winner in the reading competition. This was a rewarding experience for the students who afterwards showed a higher motivation for reading.

The Reading Olympics Program received much praise and recognition from the students’ parents, community, and the Los Angeles Unified School District. Los Angeles television media promoted positive coverage of the program. The Los Angeles Times and Sentinel newspapers also carried articles on the implementation of the program and its impact on the students and community. As a result of this and other efforts, the reading scores improved significantly at 66th street school. The Reading Olympics Program continued for four years with much enthusiasm each year. Cheryl Miller, Florence Griffin Joyner, and other Olympians came to present the trophies to the students during the program.

Lorene was an avid Christian woman. Upon her settling in Los Angeles in 1962 she joined Trinity Baptist Church where she was mentored by the late Sister Pauline Alexander. She was an active member of Trinity for 58 years. She served as a Sunday School teacher, and a charter member of Esther missionary circle. She also was a member of the Living Word Bible Fellowship, Trinity Sunlight Seniors and the Trinity Scholarship Committee.

Lorene met James Bradley while he was a U.S. Naval Serviceman. After encouraging him to attend church with her, he joined and they were married in June of 1964 by the late Rev. Dr. Elliott J. Mason, Sr. Three beautiful children resulted from their marriage.

After 35 years of service in the Los Angeles Unified School District Lorene retired and became a woman of leisure. She enjoyed entertaining in her home, shopping with her ‘besties,” traveling, dining out, and watching sporting events. Highlights of her travel were attending the inauguration of both President William Bill Clinton and President Barack Obama. She was a sports fanatic and a dedicated Lakers and Dodgers fan. Although she relished in all these activities, her greatest joy was helping others.

Lorene was preceded in death by her parents Katie Bledsoe Ingram and Albert Morgan, one sister Gertha Lee Dotson, two brothers, Lil Al and Deuce Morgan. She leaves to cherish her memories, James Bradley, her husband of 56 years, one son, Vincent Bradley, two daughters, LaNicia and Lauren Bradley, one grandson, Erik Endre Taylor, one great granddaughter, Nola Pearl Harris and one stepdaughter, Billie Sue Mosely and family of Louisiana. She also leaves one Aunt, Elsie Glover, 99 years of age, seven sisters and five brothers, and a host of nieces, nephews, cousins, and friends.

Read Thank you letter to Pastor and Congregation

We are now posting our weekly sermons to our YouTube channel.  You can see our full services each week!
Click Here: